Perseverance on the Trail – Running the Chuckanut 50k 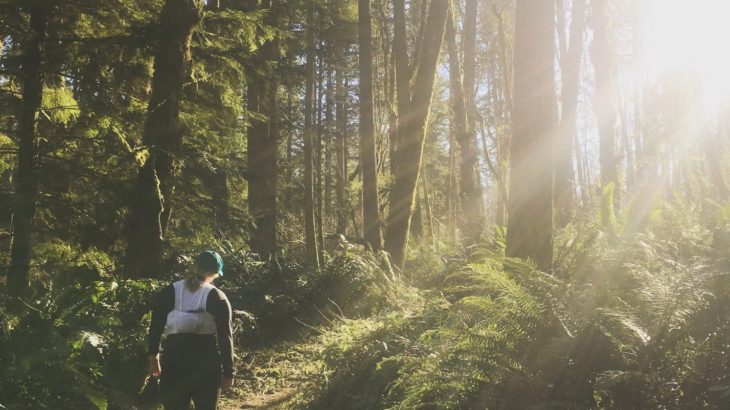 My dad was a marathoner. He would raise money for charities such as the National MS Society, Sloan Kettering, and American Cancer Society. When I was younger, we would travel all over with him to his races. I would run a 5k here and there, but I never took it very seriously until my dad approached me in 2015 about running the Chicago Marathon for team ‘Run Down Cancer’.

We would be running as a family to honor my dad, a cancer survivor, and in memory of my mom, who passed away from cancer in 2009. I thought it was crazy at the time, going from zero to marathon, but I obliged, and it was while training for this event that I found trail running. Unfortunately, a perfect storm of knee pain, a cold, and interviews scheduled the Monday after the Chicago Marathon, had me backing out from the race a couple of days before my trip. I was terribly disappointed about not joining my family in running, but looking back on it now, this was my starting point.

I continued to run on the trail, which I found massively more enjoyable than constant pounding on pavement. I feel like a kid out in the woods exploring and flying down hills. In 2017, I ran my first trail half marathon, ran the Ragnar Road Relay – Northwest Passages, and ran the Ragnar Trail Rainier relay at Crystal Mountain Resort. Later that year, a close friend of mine, Kristi, challenged me to run the Chuckanut 50k — over 31 miles through the Chuckanut Mountains in Bellingham, boasting 5,000 feet of elevation gain.

We began training and when registration day arrived on December 1st, still unsure I’d be able to run this beast of an ultramarathon, during tax season, I took a leap of faith and entered my registration. This race generally sells out on opening day, so there was no time to be indecisive. The website continuously crashed for the first two hours the registration was open, which of course, made me want to do it even more.

Over the next few months, I’d run as much as possible during the week, and would plan long group runs on the weekends. Every weekend we pushed the distance. Each of those chilly mornings, we started out not knowing if we would be able to finish. Every weekend was a new accomplishment. There were times in the beginning when we would run out of food and water. There were times when we ran into unexpected snow, rain, and hail. But through these experiences we pushed ourselves further than we ever had before, grew closer as friends, and made memories out in the mountains that I’ll cherish forever.

A few weeks out from the race, I felt certain I was nowhere near prepared for this 50k. The 8-hour cutoff with 5,000 feet of climbing was going to be a near-miraculous feat. I nervously stuffed my face with carbs for three days prior.

On race day, Kristi and I walked from our Airbnb over to the starting line at Fairhaven Park. We nervously chatted with our other running friends, then they counted down, and we were off! Kristi and I were nearly in tears at the start, overwhelmed and disbelieving that we were actually doing it. The first 6.7 miles were relatively flat along the interurban trail to aid station #1. I switched from road to trail shoes, strapped on my pack filled with water and aid, and grabbed my trekking poles.

But here’s where it got tough. The next part of the run is the infamous Chuckanut Ridge, a rocky, rooty, steep, and generally unforgiving section of the course. My pace slowed to a crawl as I tried to navigate around the natural obstacles, cursing at the beautiful view from the top of the ridge. My feet ached and I could feel they were terribly swollen. I tried to convince myself that I was fine and would make up the time on the next downhill section. At about mile 15, I hit the dreaded wall. I had ‘bonked’, run completely out of energy to move forward. I pushed myself to run a few steps, walk a bit, then run a bit more.

Once through the challenging Chuckanut Ridge Section, the trail became forgiving again, a soft, non-technical, mostly downhill section. This is where I thought I would have been able to kick it into high gear again, but instead I was walking. The pain in my feet was substantial, and I was becoming dizzy. I tried to power-hike through this section, but I felt my dream of finishing the race slipping away. I pondered what it would take to find a ride out at the next aid station.

My GPS watch was telling me I was at mile 22, but the course stated that aid station #4 was at mile 20.3. I was desperate now, and I may have 10 more miles to go. Then, thinking I may be delirious, I see a man in a hula skirt, Hawaiian shirt, and a silly hat. He welcomes me to the Luau. I approach tiki torches, cheering volunteers, music, and a table full of food. They offered me a Jello shot which I politely declined. Despite wanting to quit moments ago, the encouragement from these silly aid station attendants kept me moving. I inquired as to the actual mileage, we were at mile 21. With the steepest part of the course to come.

The infamous ‘Chinscraper’, a double-black diamond hill for mountain bikers, is a straight upward climb. I tried my best to crack a smile at the strategically placed photographer, but I had to come to a complete stop at three points on this climb. I looked up at the sky, my vision blurring, and decided to keep pressing on.

Once at the top of Chinscraper, I knew it was all downhill from here. I hobbled down hills for the next few miles, breaking when my feet told me to stop. The cutoff time for aid station #5 was 3:00 pm; I arrived at 3:05 pm. At this point I’d run almost a full marathon distance. I asked if they’d let me finish from there, to which I received a snarky reply, ‘if you can run 6 miles in 55 minutes.’ This irritated me, so I grabbed a PB&J and took off.

My legs were unable to run anymore. I decided I would power hike it in. Even if they were going to cut me off, I wanted to finish the distance. Those were the longest 6 miles of my life.

Nearing the finish line back at Fairhaven Park, a man who I thought had dropped long ago came flying up behind me. He had passed the course sweeps and they were cheering us on to the finish. I set the pain aside and decided to bring it home.

After 8 hours and 51 minutes, I crossed the finish line. I was greeted with high fives and hugs from my friends and the race staff, and was overwhelmed with emotion and exhaustion. I had finished the Chuckanut 50k. The course director took down my time as an official finisher despite being past the stated cutoff. For that, I am grateful.

Looking back on this experience now, I see it as a journey more than a race to a finish line. While I wish I would have performed better, I’m proud that I took on such a big challenge and didn’t give up when I wanted to so badly. I learned so much about myself, and I did what I thought was impossible.

Reach out to us, we’ll take care of the rest